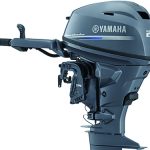 The exciting new F25 delivers the weight and performance you would expect from a two-stroke, with all of the advantages that comes with Yamaha’s industry-leading four-stroke technologies. This new generation outboard is not only an improvement on the four-stroke model it replaces, but also exceeds the all-round capabilities of Yamaha’s legendry 25N two-stroke outboard. For the first-time in Yamaha’s four-stroke history, the new F25 comes with battery-less fuel injection – delivering easier starts, better fuel economy and an improved overall operating performance.Through smart design, the new compact F25 is now the lightest 25 horsepower outboard in its class – 20Kg lighter than its four-stroke predecessor and less than 10 kg heavier than Yamaha’s 25N two-stroke. This engine comes packed with additional features including Yamaha’s variable trolling and YCOP remote security, and is compatible with Yamaha’s range of command link gauges.